Climate Change? What a difference a fortnight makes!

Having just climbed out of the pond after my second swim of the Easter weekend – a little bracing, but most satisfying – it struck me that only a fortnight ago I wouldn’t have even contemplated a dip.

Having sailed though March with barely a tremor weather-wise, dear old Mother Mature came and bit us on the bum on the 4th April.

In common with the higher parts of Wales, we copped about 5 inches of that heavy sticky snow in just 24 hours.  Apart from flattening the daffs, it brought down a few branches including one which has necessitated some repairs to the rope bridge. 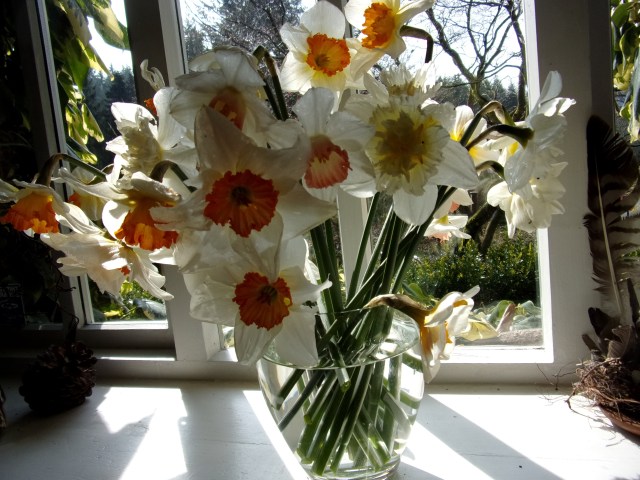 Within a day most of it had gone, so I had a good session on the hydro, although as so often it all came too quickly rather than just the right amount spread out over more days.

The next few days bumbled along feeling really cold in the wind, but warm and sunny out of it, with the odd frost overnight.

Then came the ‘Bank Holiday Heatwave’ and it has been shorts and T-shirts, skinny-dipping in the pond, barbecues and lunches on the patio.  Oh yes, and some garden visitors.   What a turn around!

← Shinrin-yoku or 森林浴 (Forest Bathing)
In praise of peas →

14 Comments on “Climate Change? What a difference a fortnight makes!”

Garlic crop this year looking blooming marvellous. Garlic Solent White interplanted with Allium Christophii in an experimental Hugelkultur planter. Growing medium is a mix of rotting wood (swipe), fresh grass clippings, composted woodchip and horse manure. Planted in the Autumn. #Hugelkultur #growyourown #organicgardening
Wild gardening under the washing line in the Cottage Garden. Ox-eye daises, fox and cubs, sorrel, cotoneaster, foxgloves, etc,etc. Wild Gardening Workshops this weekend are fully booked but there's some availability for the September date. (Oh, and more self-seedef sweet rocket of course).#wildgarden #wildflowers #selfseeders #nomow #washingontheline
Sweet rocket in the Potager rocketing away. With alliums, meadow buttercup, sorrel, Good King Henry, Welsh poppies, broad beans....#polyculture #polyculturegardens
We have a white theme in the woodland pasture and picnic meadow just now. Hawthorn, pignut, meadow saxifrage and greater stitchwort. Foxgloves waiting in the wings. #wildflowers #wildflowermeadow
Compost workshop here today. These are some of our compost bins. Second pic is two occupants of one. May be lots more soon. I diusturbed them mating. Put the cover back on and retreated. Slow worms eat slugs so the more the merrier. Another workshop in July. Learn how to make glorious compost in a glorious garden. #wildlife wildlifegardening #compost
Morning sun in the Cottage Garden with Bistorta superba looking...well actually...superb. #cottagegarden #junegarden #sunatlast