Have we found the Bedd in Nant-y-Bedd?

After the tremendous storm in November last year which washed away the central part of ‘Daffydd’s Wall’,

Dafydd’s wall, as it was

All gone, after the storm.

we have finally got around to having it rebuilt, by Bruce Rogers. 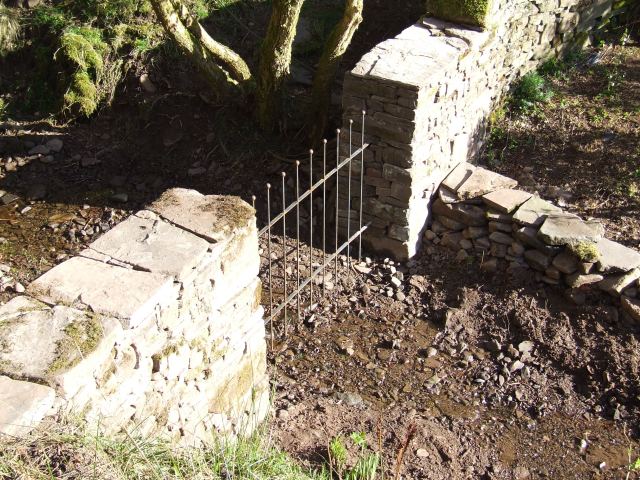 But that’s not what this is really about.

With the new wall came the opportunity to re-align the fence above it, by the maple and walnut trees.

On the weekend, I pulled out the old fence which was erected by Sue’s Dad about 25 years ago.  I have to say he did a superb job.  The wire fence itself was in first class condition and there were so many staples holding it in place that it took all of Saturday morning just to get the wire loose!  Most of the posts came out easily, but the corner one took a long time and a lot of head scratching before a solution could be found. Inserted to just over 2 feet it was a swine to get out!

The new fence is in line with the wall and so we have gained a bit of extra ‘garden’. Sorry, sheep.

When Sue started to clear the rank growth and hard rush, she came across a couple of large flat stones.  Could this be the Bedd? {Regular readers will know that the name of the house – Nant-y-Bedd – means Stream of the Grave}.   We have wondered for many years about the location of the Bedd and maybe now we’ve found it!

Trying to dig out a mass of hard rush, the spade kept hitting solid rock, just a few centimetres below the surface.  Abandoning the rush removal for a few moments, we started to strip back the soil and there it was, a perfectly flat, large stone – a grave stone?  Carrying on, we found five more big, flat stones covering an area about three yards square – a mass grave? 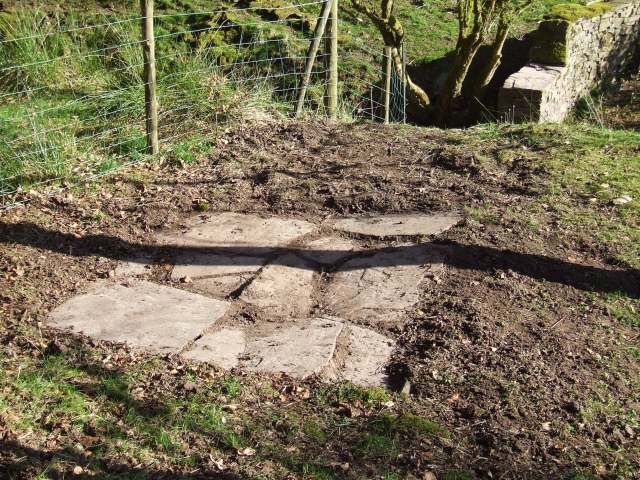 Mass Bedd or something else???

There seems to be some space under at least one of the stones – it sounds hollow when tapped – but I’m too superstitious to go lifting a gravestone.

We’re going to make a feature of it, maybe with a couple of seats or a bench, where visitors can sit and wonder who is beneath their feet.

Alternatively of course, it could simply be where the generator which supplied the house with electricity before the mains came was situated.  But that would be boring wouldn’t it?

The Potager this afternoon in light drizzle. Proper wet rain would be nice. Sweet peas surviving the drought...and Rosakrone Swedish heritage pea, Taunton Deane perennial kale, Nettle leaved bellflower, Monarda, etc, etc. #organicveggies #perennialveg #polyculture #Potager
It's cooler this morning. Earlier in the week we were seeking out shady spots in the garden. One of us was working and the other was chilling out with newts, Southern hawker dragonflies and the boat. #shadygarden #coolgarden #wildgarden
Morning sun on green roofs before the heat of the day. Cottage Garden. Thankful for our shady areas in the forest and garden in these temperatures.# coolgarden #shadygarden
The Woodyard this morning. In the foreground is our heugelkultur garlic planter with Allium Chistophii, with rose Bobby James framing the gate into the Potager. #summergarden
The natural swimming pond at Nantybedd, as mentioned in the current edition of RHS magazine,The Garden. 'It is a truly magical ecosystem, with a relaxing pastoral and woodland view down the valley' says Head Gardener Sue Mabberley (obviously having a flowery poetic moment). But it is a wonderful spot to sit quietly with dragonflies and birds.#RHS #wildgarden
Sun streaming through the trees into the Potager this morning. Climbing beans climbing, parsnips flowering (for the pollinators), onions growing well and not the least bit bothered to be sharing their beds with flowery companions. #polyculture #organicveggies #floweringveg