one turkey = one bench

Yes, it was barter time when I was asked if I could repair an old garden bench.  It just happened that the person asking is also the person from whom we get our Christmas turkey, so it seemed a sensible way of doing business.

The bench, when I first saw a picture of it, looked like it had seen many better days and I thought that it was going to need a completely new set of seat timbers.

Oh dear, what a state!

However when I got it back here and removed the broken lath, I realised that in fact the timber was in really good condition and just needed a lot of TLC (and quite a few sanding belts!).  Once I’d ground off the rusted up nuts and bolts, I set to with the sander and they all came up really clean, despite various coats of paint.  The only problem then was how to find a suitable replacement for the broken one.

The paintwork on the metal frame disappeared under the tender machinations of a flap wheel on the angle grinder and the first part of the job was over.

The frame was really well made, in two pieces at each end joined with rivets rather than welded.

Cold January is not the best time for painting, but a couple of almost mild days allowed a couple of coats of dark green Hammerite and all of a sudden we had real progress.

Whilst sanding the laths and grinding off the bolts I noticed that some of them were secured by countersunk screws, so a trawl on the ‘net turned up something similar and I was ready to put it all together, once I’d found a replacement for the broken one.

A trip to the timber merchants eventually came up with a piece of oak which wasn’t far off the colour, but then I found, lurking in my shed, a length of hardwood which I’d rescued after the electricity company had replaced a pole down by the river.  Sanded down it looked OK, but was a bit too big, so off to Ian the neighbour and a few passes through his planer-thicknesser and I was in business.  Quick run through with the router to radius the edge and, as they say, a blind man would be glad to see the difference!

No phone at the moment due to a BIG tree taking out the cable and BT not in a hurry to replace it, so an e-mail to Caroline and she was on her way to collect. 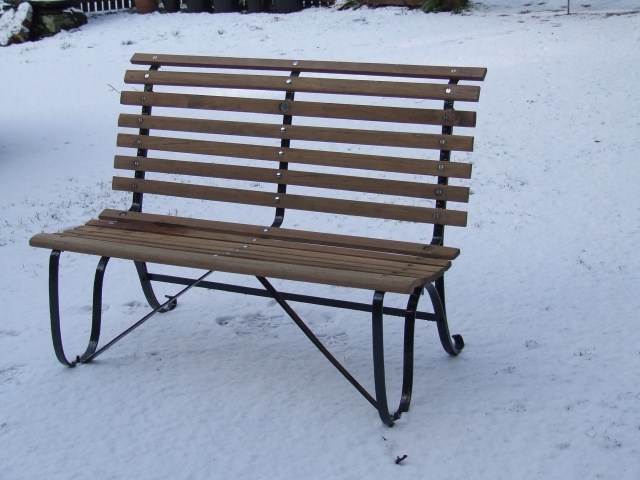 That’s not a turkey, that’s a really nice bench which hopefully will last a long time into the future.

← The Big Tree has gone
My kind of gardening →

It rained overnight and this morning. Rather a lot. (32 mm in 24 hours and then 20 mm in 3 hours this morning... according to the chap who received a rain gauge as a Chistmas present...) Thunderous river, stream in spate, hydro working flat out. And then the sun came out. #autumnrains
So, how do I make leaf mould? Couldn't be easier. Just rake up your autumn leaves into a heap...and forget about them for a year. Simple as that. Fancier methods involve an open bin like this one. So easy that there's time for an afternoon cup of tea in the Woodyard in the autumn sunshine...#autumn #leafmould #nopeat
We were treated to a glorious autumnal sight this morning. It looked like it had been snowing Norway maple leaves overnight. Another of our magnificent old trees which must be at least 60 years old. #celebratingourtrees #autumncolours #
Such a glorious still, calm autumn day today. Working down by the pond sowing yellow rattle and trimming hedges and other clipped shapes...
This majestic old sycamore is about 180 years old and nestled in its branches is our treehouse. We understand that the treehouse may make its TV debut this evening...with a supporting cast of a well known TV presenter. Other trees will feature. #celebratingourtrees #wildgardening #slowgardening
Wet and windy early October. Edible Forest Garden at Nantybedd. #forestgarden #wildgardening