As a bit of a part-time metal-things-maker I find it rather odd that my ‘customers’ (often Sue when she nicks something I’ve just made) seem to want the resulting ‘artwork’ to be left to go rusty – must be something they’ve read in one of these trendy gardening magazines!

Anyway, whilst it’s been too cold / hot / wet to do much in the garden, I’ve been cutting / bending / forging bits of metal into more things for gardeners.  The first two were commissions for ladies in Abergavenny.

The first wanted to hide a concrete wall and the top of a neighbour’s shed in a small garden.  This was a real design and build job, not being something I’d done before, but it seems to have worked out OK.  It was also a good combination of forge work and welding.  Here it is .. 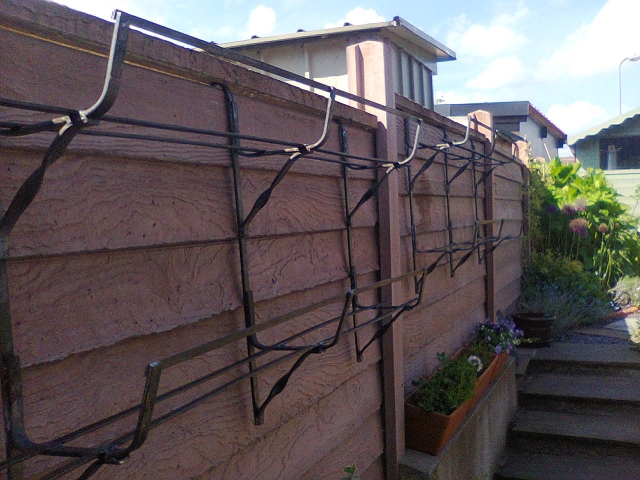 The second was for two six foot clematis supports, the only stipulation was that they shouldn’t look too heavy!   Whilst clematis isn’t all that heavy as a plant, anything six foot out of the ground needs to be a bit solid to stop it twisting, but I think the compromise was just about right.  Difficult things to get a good piccie of, but here we go.. 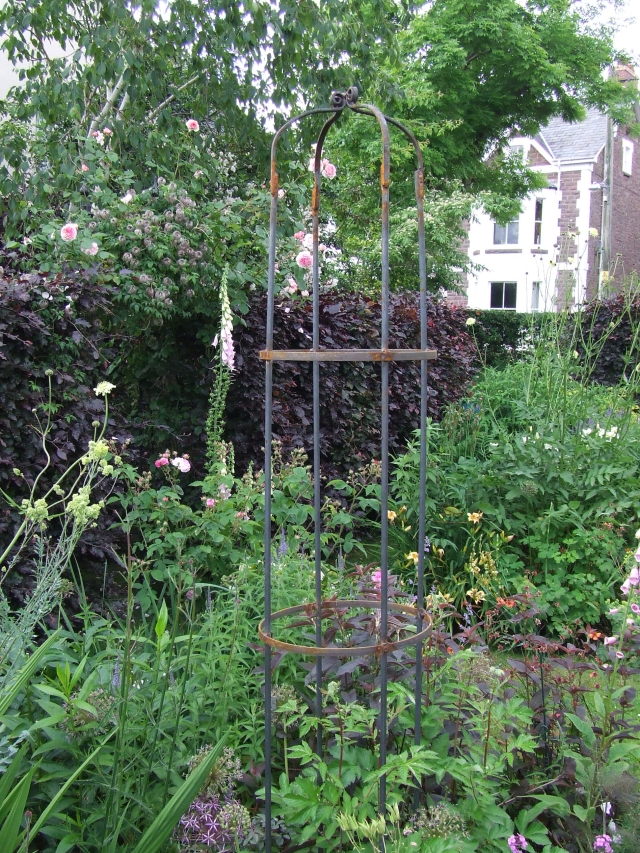 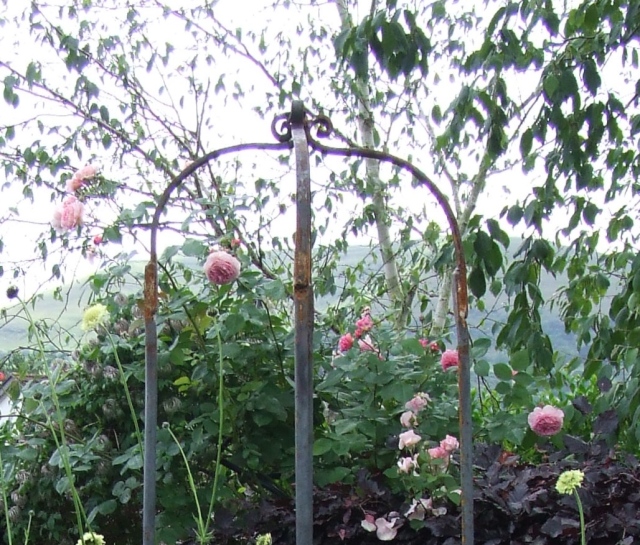 Detail of the finial

Other than that I’ve been making some new plant supports 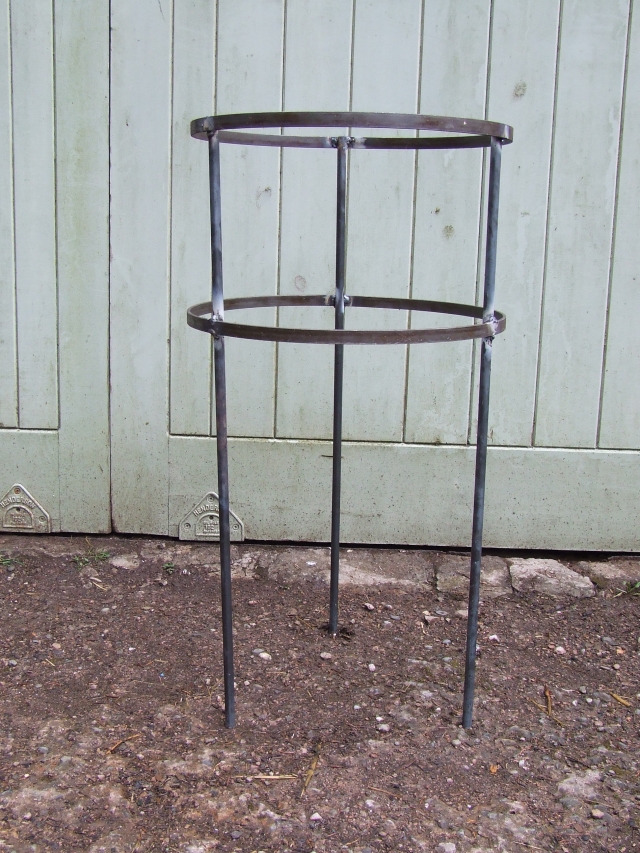 and the much admired ..

classic boot scraper c/w handle to stop you falling over!!

It’s not all outdoor stuff on the forge however, as I was also asked to make some door ‘hooks’ for the listed building down the road.  They look simple, but getting a good bend on 20mm steel bar takes some heat and hammering.  There were four in all and one is seen here with part of it’s door hinge.

I was also able to treat the hinge pieces as well so that the whole assembly shouldn’t need painting in the future.

If you have any ideas for something in metal (or a bench repair) that you want  just e-mail me on garden@nantybedd.com and I’ll see what I can do!

← A week off, much-needed rain and busy bees
Country Homes and Exteriors! →

The Potager this afternoon in light drizzle. Proper wet rain would be nice. Sweet peas surviving the drought...and Rosakrone Swedish heritage pea, Taunton Deane perennial kale, Nettle leaved bellflower, Monarda, etc, etc. #organicveggies #perennialveg #polyculture #Potager
It's cooler this morning. Earlier in the week we were seeking out shady spots in the garden. One of us was working and the other was chilling out with newts, Southern hawker dragonflies and the boat. #shadygarden #coolgarden #wildgarden
Morning sun on green roofs before the heat of the day. Cottage Garden. Thankful for our shady areas in the forest and garden in these temperatures.# coolgarden #shadygarden
The Woodyard this morning. In the foreground is our heugelkultur garlic planter with Allium Chistophii, with rose Bobby James framing the gate into the Potager. #summergarden
The natural swimming pond at Nantybedd, as mentioned in the current edition of RHS magazine,The Garden. 'It is a truly magical ecosystem, with a relaxing pastoral and woodland view down the valley' says Head Gardener Sue Mabberley (obviously having a flowery poetic moment). But it is a wonderful spot to sit quietly with dragonflies and birds.#RHS #wildgarden
Sun streaming through the trees into the Potager this morning. Climbing beans climbing, parsnips flowering (for the pollinators), onions growing well and not the least bit bothered to be sharing their beds with flowery companions. #polyculture #organicveggies #floweringveg