We built a coracle

Sue’s surprise birthday present to me this year was a weekend course to build a coracle. Run by our pond-building pal Mick Petts and based at the home of another friend in Richard Lewis, it promised to be an interesting three days. Yes it takes three whole days to make one of these iconic little Welsh boats – in fact Mick told us at the start that coracle type boats are indigenous to most places in the world, being developed originally as hide boats, in other words a framework covered in animal skin.

Muggins here forgot the camera on the first day, so there’s no pictures, fortunately, of me breaking the first seat plank by being a bit too forceful in fitting the uprights.  I think it was a duff piece of wood and anyway the new one looks much better.  The seat goes in first, then the framework is woven over and around it as you can see in this first photo.

seat and initial frame – all upside down

I should have said, that most of the building work is done upside down with the willows stuck into the ground to keep the shape. The first four rods – two each way – anchor the seat, then there are five pairs running front to back as can be seen in the photo above.  Getting the right bend in the rods is a bit of an art and involves significant, but gentle, use of the knee!

One the lateral rods are in place it’s time to weave in the crossways ones and then a couple of long diagonals which really anchor it all together.

Mick helping Sue get a diagonal in place

The base frame is then ready for the first of two gunwales which have to be woven (twined) round the outside in order to keep the shape as the boat is released from the ground.

Then the moment comes when the coracle emerges from the ‘mould’.

Next, the frame is turned up side down again!  This time on a pair of trestles so that the fabric can be worked on at a sensible height. 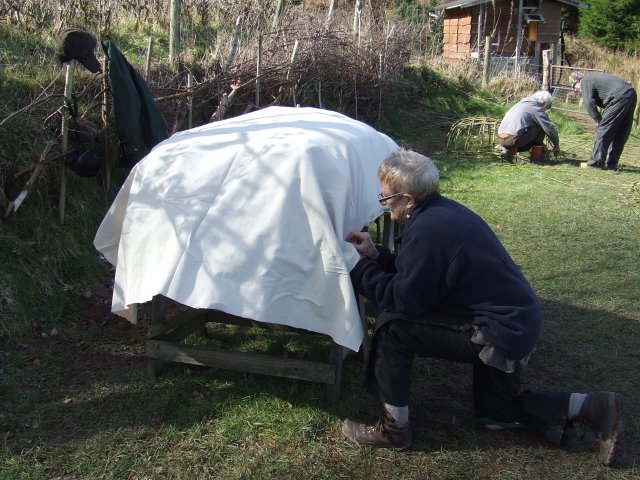 Roughly sizing the fabric to the frame

To start with the fabric is nailed to the seat and then pulled as tight as possible to be sewn to the frame at the front, rear and sides.  This leaves the corners to be shaped and is where a good dressmaker comes in handy.  Pleats aren’t something that most blokes have ever had to contemplate, but Sue showed her expertise with needle and thread and soon we had the first pleat in place.

Sue pleating and sewing the corners

Time was running out by now on Saturday evening, the sun had dropped off the horizon and the temperature was dropping, but we needed to get a coat of bitumen paint on the fabric before leaving if we could, to make things easier on Sunday, so a bit of multi-tasking took place with Sue finishing off the last pleat as I started with the paint brush.

sewing and painting together

Sunday was a bit easier.  I got another coat on the bottom of the boat and let it dry in the sun whilst I got to work on making the paddle, and Sue helped out with her sewing skills for those struggling with the process.  I used an old spokeshave I found in one of our sheds to shape the paddle and it worked well – until I hit a big knot. 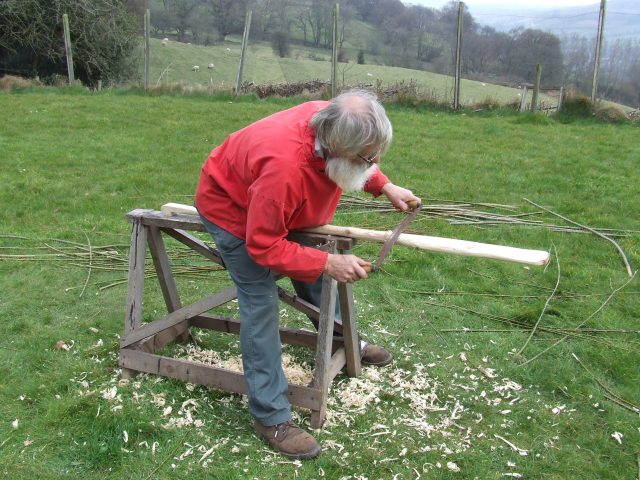 Then the final touches, giving both strength and a pleasant look to the boat, was the addition of a second gunwale which was bit more complicated than the first and also needed knitting in to the first one.  There was a bit of cursing here as the rods kept snapping, but eventually we got to the stage of snipping off the tops of  the frame rods, which had been in the ground at the earlier stages, and we had Built A Coracle!

The group taking instruction from Mick

Soon it was our turn…

Mick and Richard showing how to do it

Only one of the group fell in, getting his balance all wrong as he tried to step from bank to coracle.  Fortunately his daughter had the camera ready!

Then it was time to get the boat home.  It’s so light that I was able to load it onto the LandRover on my own. 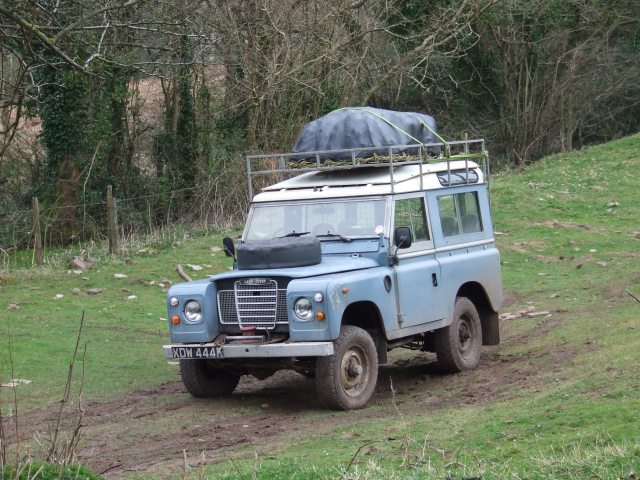 Now it’s home it needs another coat or two of bitumen and a few weeks for the willow to dry out so that it keeps its shape, then it will be onto the pond for ‘sea trials’.   I’ll post some photos of the launch when we do it.